Lauren Camp is the author of four books of poetry: Turquoise Door (3: A Taos Press, 2018); One Hundred Hungers (Tupelo Press, 2016), winner of the Dorset Prize; The Dailiness, winner of the National Federation of Press Women Poetry Prize and a World Literature Today “Editor’s Pick;” and This Business of Wisdom. Lauren is the recipient of a fellowship from the Black Earth Institute, residencies from Willapa Bay AiR, the Gaea Foundation, and the Mabel Dodge Luhan House, and a finalist citation for the Arab American Book Award. In 2018, she presented her poems at the original Mayo Clinic, and her work has been translated into Mandarin, Turkish, Spanish and Arabic. She lives and teaches in New Mexico.

Heidi Seaborn: Congratulations on the publication of Turquoise Door, it is a beautiful and arresting book. I have actually visited Mabel Dodge Luhan’s house in Taos. It is a bit off the beaten path. What brought you there and to write this book?

Lauren Camp: I was invited to be the poet-in-residence in the summer of 2013. Even though I live in Santa Fe (not that far from Taos), I had not really experienced The Mabel Dodge Luhan House. I came into the residency thinking it would give me time to work on two other projects—one being One Hundred Hungers, a collection about my father’s boyhood in Iraq. But a few days after I arrived, I felt the place and history grab ahold of me and I needed to set Baghdad aside and be in Taos in the 1920s. I pretty much wrote the entire draft of this manuscript in my little cottage on the grounds during my two weeks there.

HS: Wow! To have walked in to a place with one idea and walk out a couple weeks later with the draft of this gorgeous manuscript is extraordinary. What happened to open up this creative stream?

LC: Thank you. It was amazing. I remember that on the drive to Taos, I was very, very hot. When I arrived, the person greeting me was calm and kind. She guided me through the public rooms and gave a little history. I felt welcomed, and it put me at ease. The people working at the house were quite knowledgeable and enthusiastic about Mabel’s history. I felt this little tickle of a past time. I asked a lot of questions and listened. Suddenly, it became a world that I needed to explore. I started documenting what I was hearing and experiencing as poems. I came home a few weeks later with 52 pages of poems and a working title (which I later changed and changed again). That was pretty exciting. The poems, over the next couple of years, went through massive revisions, but I had a good start. In revising, I was building context. For me, both Turquoise Door and One Hundred Hungers have context—they are a whole thing.

HS: What about the poems written as letters to Mabel. They seem to break in as if to draw attention to what the speaker is experiencing?

LC: The letters to Mabel came later. To bridge the gap between the historical and the present, I chose to correspond with Mabel. Writing letters to someone is a beautiful action—it takes time, is one-to-one. I wrote to her with respect, as a thoughtful person. Each letter gave me a way to talk about what I was doing in the space she called home and express that back, through time, to her.

HS: I felt from the very first poem that you were escaping something when you came to Taos. What were you running from?

LC: I was escaping. It was a dramatic fire season that summer. I was escaping the wildfires. Early summer in New Mexico is sometimes difficult when there is no promise of rain. It’s dry and hot and there is nothing you can do about it. It is heart wrenching. But Taos is up, just far enough to get away. While I was driving up to Taos from Santa Fe, I was soaked from the sun blistering thru the car windows. Then I arrive in Taos, and everything is joyful. It took me an hour and half to drive there and in that time everything changed. Supposedly, when Mabel first came, the trip from Santa Fe to Taos took 17 hours!

HS: Place is so important in your work and you take your reader directly into the landscape whether its Baghdad or New York or now New Mexico. This collection is such a love letter to your adopted state, New Mexico.

LC: It is! When I travel, I try to write. It’s my way of holding things that seem valuable and figuring out places. I came to poetry after having moved to New Mexico. Living here and writing poetry have given me a “focused witnessing” ability that I didn’t have before. Poetry has allowed me to take in what I wanted to take in: a tree, an angle, a detail. I photograph in this way, too—very focused on specifics rather than a grand overall picture.

HS: You are physically moving through these poems, experiencing this time and place, rather than observing. I’m curious what made you enter so directly into this world and make it your own?

LC: I suppose that reflects how I initially wrote the poems. It wasn’t so much a years later, looking back sort of approach. Everything was happening in the present or the very near past. I was documenting and detailing. Later, when I went back to revise, I could find a poem’s truth more clearly, which, in some ways, turned out to be different from my truth.

HS: The sky is ever present in this collection. The sky is in the majority of the poems and yet your images of the sky surprised, each evocative and new. The sky is almost its own persona. Was it the lack of rain? The drought?

LC: When you live here you have to write about the sky. It is certainly a subject that remains strong for me after two decades. The drought was around me, over me. Drought in New Mexico is like a wool blanket—so heavy and oppressive. No way to get relief, no rain.

HS: Do you experience drought as a writer?

LC: I don’t experience dry spells, or maybe it’s more accurate to acknowledge that I don’t think of the writing process that way. I can always drop into revision and stay within that. I don’t write every day or generate every day. I don’t want to sit with a blank piece of paper and fill it. I want to write when I have something to write. I revise every day. There can be long stretches when I am not writing and then when I am compelled, I write a lot.

HS: As you were apparently during this residency at the Mabel Dodge Luhan House? Was this different than other residencies?

LC: I’ve done five residencies; this was my second one. Almost all have been self-directed. In this case, I was in a cottage on the property—Auntie’s Cottage, where I could retreat to write at this adorable little table. But I tended to do that only at night. The poet-in-residence wasn’t meant to be a public thing, but I made it a public thing because it was a busy time at Mabel’s, and I’m a social person. I interacted with everyone. I was both guest and part of the house. People would arrive and sit by the fireplace as they did a hundred years earlier. That history took hold and instead of writing what I had planned to write, this came.

HS: Was it Mabel’s spirit at work?

LC: Perhaps, in that Mabel was a connector. She brought people to be with her. I don’t think I would have liked her, and she definitely wouldn’t have been interested in me at all! She was ending her third marriage when she arrived in Taos and then was onto her fourth marriage quickly. Her whole life she was seeking something. Seeking the love or attention that she didn’t get as a child. She started these salons—what she called gatherings, first in Italy, then in Greenwich Village.

In Taos, her goal was to create a Utopian society, continuing the salons. In that time, Taos was an outpost, inaccessible, not overtaken by tourists. She jumped into a space that she didn’t belong in and made herself at home. Soon artists and writers from all over the world were making the long trip to Taos to be with Mabel. People such as Willa Cather, Georgia O’Keeffe, Rebecca Strand. Georgia O’Keeffe’s first introduction to Taos was through Mabel. She came three times to Mabel’s Taos house, and ultimately made New Mexico her home. It was here that she made her most important art. Mabel brought people and gave them the possibility of a different viewpoint. Such an amazing gift for a creative person!

HS: Many of the people drawn to Mabel also influenced numerous poems in this collection.  I’m thinking of the poems about D. H. Lawrence, Georgia O’Keeffe and Ansel Adams in particular.

LC: Yes, Mabel was a conduit to all these artists. The Ansel Adams photo. for example, drove me to research his style, and in particular that photo (Moonrise, Hernandez, New Mexico, 1941). I wanted to understand where that came from and how he got that image, which led to my poem “Exposure.”

My visit to Lucero Peak Cave, where D. H. Lawrence set his short story “The Woman Who Rode Away,” was a great adventure. It was fascinating to write about a place that he had written about, as if I had stepped into his fiction when I stepped into the cave.

HS: Yet the sweep of your work in this book is about more than Mabel and the artists or Taos in the 1920s, to me I read also a landscape of grief?

LC: Yes, grief and love and loss and place. This is what I return to over and over. Turquoise Door is a love letter to a time and place. I often choose to write about individuals and set their stories in a place, and then I work to make that place come into being.

HS: And you have done that with Turquoise Door. The reader has a deep and complete sense of living under that vast New Mexican sky. You have taken us behind the Turquoise Door to experience a time and place, to get lost, to feel loss. Thank you for taking us with you on this journey, and for talking with me about your process writing this remarkable new collection. 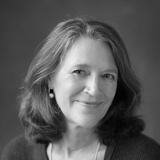