In 2017, I traveled to Cody, Wyoming, to speak with people about a school board proposal that would allow teachers to carry concealed firearms in the classroom. My visit was intended to shape a single chapter I’d planned for a book-length exploration about guns and gun violence in America. Although my previous book publications were in poetry and lyric essays, and though I had no training as a journalist, I was determined to write this book as straightforward mass-market nonfiction. Appalled by the gun violence that plagues America, disgusted by the ways in which our firearm obsessions seem to preclude empathy, and exasperated by our ongoing failures to enact any meaningful legislative change, I worried that allowing this project to be shaped by lyric impulses or the inherent vicissitudes of the poetic line would serve as a hindrance to tackling the issue head on.

By the end of my time in Cody—during which I spoke to a wide range of community members, including the sheriff, the mayor, teachers, principals, and gun-owning school board members on both sides of the debate—I’d recorded many hours of interviews. Exhausted and reeling, I found myself with a few hours of free time on my hands and decided to stop into a downtown storefront adorned with a sign advertising “The Cody Dug Up Gun Museum.” Inside, I discovered a room packed with long vitrines containing pistols and rifles that had been unearthed in various locations across the country. The museum’s name, it turned out, was more descriptive than enigmatic. Here were guns mottled with rust and in various states of decay, discovered in the soil of Civil War battlefields, Western ghost towns, riverbeds, and the charred remains of frontier cabins. From the moment I began peering into those glass cases—many of which also contained mounds of dirt clumped with rocks and little tufts of grass—I began thinking about how the museum’s idiosyncratic theme might offer a new means of exploring the guns that saturate the American landscape. And yet, even if I felt the first tug of a metaphor at my sleeve, I also felt the pang of restraint. I had facts to parse and interviews to transcribe. The locked-in structure of my planned book meant that the chapter about Cody was relegated to exploring things such as holster design for educators. There was literally no space to interrogate the museum’s unearthed guns.

In a well-known letter to his brothers, the poet John Keats introduced the term “Negative Capability,” which privileges the capacity for dwelling “in uncertainties, Mysteries, doubts, without any irritable reaching after fact & reason.” Although Keats’ letters were admittedly far from my mind during my visit to Cody, that was to my detriment. Had I been a quicker study, I might have seen the inherent strangeness and resonant images of those dug-up guns as something that might facilitate a more meaningful engagement with our firearms than any orderly, fact-crammed prose. Had I taken a cue from Keats—as one should, without fail—I might have realized more quickly that my book project, wholly unreasonably, relied too much on reasoned argument.

Matthew Olzmann’s poem “Letter Beginning with Two Lines by Czesław Miłosz” concludes with a haunting indictment of America’s firearm debates. “That click you hear?” the poem asks, “That’s just our voices / the deadbolt of discourse / sliding into place.” If, the poem suggests, we hope to avoid reducing our dialogue about guns to mere clicks that signify nothing but the end of a discussion, we need to find an entirely different language and means of action. America’s inability to accomplish the most common-sense changes to firearm legislation has long been untethered from reason. Perhaps at this stage of our dormant debates, poetry—by virtue of its varied forms, lyric images, and associative leaps, among many other things—offers a far better means of interrogating the grotesque mystery of our inexplicable failure to protect our citizens.

Although my planned nonfiction book about guns capsized for a variety of reasons, that turned out to be a serendipitous failure. Unable to relinquish so many of the stories and moments I’d encountered during my travels, I began writing a series of poems that was fueled by a more associative approach. In the end, Cody’s Dug Up Gun Museum inspired what became the wide-roaming title poem in The Dug-Up Gun Museum, a book of poems intended to be suggestive rather than exhaustive. Although that piece opens with descriptions of those rusted-out guns, its lens is far-ranging. “Tell all the truth, but tell it slant,” Emily Dickinson famously advised, and my poem found its requisite slope in the dirt mounded in museum vitrines before straying to a shooting range where visitors can pull the trigger on every gun that shaped American history (“From flintlock to full auto!”), a life-sized John Wayne cardboard cutout floating through the hallways of a high school during active shooter drills, a thirty-foot Winchester rifle sculpture perched on a gun shop roof, and, among many other things, a playground where a five-year-old finds a pistol discarded in the grass. The resulting piece isn’t interested in trying to resolve any Second Amendment debate. Instead, I hope that its jagged stanzas, far-flung content, and privileging of images over facts all contribute to a kind of kaleidoscope portrait of our post-truth, post-fact America through the lens of guns. While I’m desperate for real change and authentic conversation when it comes to firearms in America, I’ll also welcome any mode of discourse that veers from our same predictable deadbolt clicks and allows us to see anew the baffling tragedy of what we’ve normalized, and who we really are. 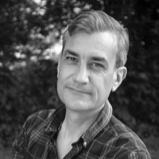 Matt Donovan is the author most recently of The Dug-Up Gun Museum (BOA 2022) and the collection of lyric essays, A Cloud of Unusual Size and Shape: Meditations on Ruin and Redemption (Trinity University Press 2016). He is the recipient of a Whiting Award, a Rome Prize in Literature, a Creative Capital Grant, and an NEA Fellowship in Literature. He serves as Director of the Boutelle-Day Poetry Center at Smith College.