Growing up, my father’s job of tech and coding was an exciting, fast-paced world. It was thrilling, all of it—the business trips, the client meetings, the miles he accumulated on his travels. My sister and I would replicate his conference calls, where we would pretend to be stuck in a high-stakes crisis situation that involved an old computer and code we couldn’t begin to comprehend. Our universe was shaped by our understanding of software, which, admittedly, wasn’t much. Even today, despite having landed far from the tech world, despite hearing friends and strangers on LinkedIn complain every day about their tech jobs, I look at it with wonder—for this was the first universe I thought I knew.

How to Order the Universe is a dream-like meditation on the personal lexicons we create for ourselves and the unique ways in which we slowly, almost mundanely, settle into perceiving the world. Translated from Spanish by Elizabeth Bryer, María José Ferrada’s novella follows seven-year-old M and her traveling salesman father, D, as they move around Chilean towns and cities selling hardware products from his brand, Kramp. Along the way, they meet S, a perfume salesman, and E, an eccentric photographer of ghosts, who in their own, unknowing ways, upend the boundaries of M’s and D’s carefully constructed world of hardware sales. Told from M’s retrospective voice, the narrative sustains its wise, profound tone without ever sacrificing its child-like wonder. There is grace in this child’s world; grace that is so powerful it spins the chaos of her depressed, seemingly detached mother and parallel education-providing father into soft, moving characters. Some things are easy to explain in M’s universe, like the world of sales, and her mother—“She was simply sad, and her sadness meant she couldn’t pay attention to details.” Other things, like multiverses and secret second families, are harder— “For as long as the hug lasted, I pretended to be the sister he would never meet. I pretended, the boy pretended, S was pretending; the world was a ridiculous theatre.” M is strangely reminiscent of Jack from Emma Donoghue’s Room, whose perspective offers the opportunity to move beyond the confines of a four-walled room and a clearly defined world. M’s narration allows her readers to transcend the political and geographical boundaries of the Chilean landscape and explore the smaller, more intimate affinities of human experience.

Ferrada tells the story of a young M’s reckoning with the idea that things may not be what she grew up thinking they were. The cognitive framework within which she has learned to perceive her universe—the one with D and E and S and her mother—is broken at the brink of adulthood. But M’s precocious perspective opens us up to the more tangible aspects of the world they live in. There is a swift sense of momentum to Ferrada’s narrative, one that moves from the intimate story of M and D to the larger story of Chile under the dictatorship of Augusto Pinochet. The novel seems at least partly autobiographical, with Ferrada’s own father being a traveling salesman who took her along on his trips when she was a child. In a piece for Lit Hub, Ferrada speaks of how her father read the first draft of her book and remarked that it was a novel full of secondary characters. On the contrary, I would propose that it is in fact a novel full of protagonists. Every character is covered in the same shroud of mystery. We see their actions while being constantly unaware of their intentions. And yet, every character has a fully realized character arc and a clear, definitive voice, even in their fleeting, elusive appearances. Ferrada says it best through M’s voice: “E was a secondary character in our lives. And we were secondary characters in a larger story.”

How to Order the Universe is littered throughout with Kramp’s hardware—nails, saws, hammers, and door viewers. But seen through M’s eyes, the world of hardware is suddenly soft, with incredibly round edges. I glided through the book—as if I was traveling with the salesmen, as if I were a traveling salesman myself, as if I was moving across the towns of Chile—trying to order the universe. It is a wonder how, set against the turbulence of Pinochet’s era, M’s world moves in a fable-like sequence. Going in and out of the coffeehouse of traveling salesmen, it is hard to question the nature of this intricately constructed reality. Maybe because Ferrada has a gift for taking abstract details and writing them into exceptionally physical prose. This is especially strong when she talks about time and space, as she does here: In that place, preparing a welcome coffee for me, D seemed like a human being whom time had left inside some kind of parenthesis.

But the abstract nature of M’s world also cracks. I found myself stumbling in the ghost town that E visits so often, and the events that topple the narrative’s dreamscape felt almost too vague to make complete sense of. The political landscape that plays such a huge part in the novel’s literary landscape is never overtly referenced. I imagine going into the book not having read the blurb and I wonder: would I have understood? Probably not. But admittedly, I’m approaching the book through mostly foreign eyes and there is certainly beauty in the newness, in the need to learn, in the urge to Google. It is also easy to forgive this difficulty because it is easy to regain footing. The narrative operates on liminal, fragmented spaces. If silence was tangible—if gaps in conversations and days “off-the-grid” could be given a shape—I suspect it would look a lot like Ferrada’s vignettes. Because there is haziness and abstraction floating through the book but also a keen sense of form. Amidst the chaos of ghosts, parallel educations, and political turmoil, Ferrada provides respite in the form of small lists and classifications: a trivial sense of order.

This seemingly generational need to order their universes brings M’s family together, and maybe my own need to order my universe brings me to this book. Ferrada has created a dimension for herself in the literary universe, and I, for one, am happy to jump back in. 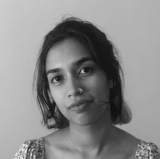 Abhigna Mooraka is a writer, educator, and procrastinator based in New York City. She is originally from Bangalore, India.