By September 11, 2001, I had been living in Warrensburg, Missouri, for five years. I’d stay another nine before moving away. At the time, Warrensburg, surrounded by farms, had a population of about 14,000. In the middle of town was a stately courthouse in front of which stood a bronze statue of Old Drum, the dog who many decades ago inspired the phrase “a dog is a man’s best friend.” Around the corner from Old Drum was a street lined with seedy bars, hamburger joints, a little coffee house, a T-shirt shop, and, by the train tracks, a grain elevator. And just up the hill was Central Missouri State University, where I taught poetry to farm kids, airmen from the Air Force base, retirees returning to college, small-town kids from Lone Jack or Sedalia, and always a few who drove in from Kansas City.

With Wayne Miller (who also contributed to this conversation) I was editing Pleiades: A Journal of New Writing, so I had my finger on the pulse of what my peers were writing. I think I was reading poetry manuscripts when the towers actually fell, and for months I heard talk about how that day heralded the “end of irony” in poetry, the end of coy postmodern poetic play, the end of poems about Barbie dolls and Applebees and fortune cookies.

A new seriousness, we were told, was suddenly upon us.

But little immediately changed in poetry, at least from where I sat in my editor’s chair, reading mountains of submissions, slipping rejection letters into self-addressed stamped envelopes.  Maybe we got some small reduction in arch pantoums about cartoon characters and, yes, for some months we received poems about watching the towers fall. But then those poems stopped coming in, and we returned largely to what we had before with, yes, maybe a little less irony. Maybe.

The unfolding wars in Iraq and Afghanistan didn’t noticeably change the subject matter of poetry, at least not in ways that I noticed. There were certainly poets who wrote—and continue to write—thoughtfully about those wars, but I can’t honestly say that, after twenty years, we have a vast body of American poetry concerned with them—not like we have a body of Vietnam War poetry, for instance.

Most of the poets I knew then absorbed the news of war the way I did: through television, newspapers, web pages. I wasn’t worried about the draft, because there was no draft. My friends from college or my MFA program didn’t enlist. We were mostly middle class, graduate-school educated, and those wars were far away, fought by people with less money and less access to elite education. In most ways, if you were like me and most of the actively publishing poets I knew, it was pretty easy to live through decades of war in comfort and not really be affected. We could always turn off the TV, after all.

But that doesn’t mean 9/11 failed to make an impact on us or on American poetry. It’s just that the impact may have played out not in a national literature directly about any particular event or war, but in more subtle and complex ways.

I was 31 in 2001, and not particularly sophisticated politically. Neither had I found what I imagine today to be my poetic voice. I think I mostly had good political values and, broadly speaking, I trusted that America’s government was, more or less, good.

What the Bush administration’s response to 9/11 taught me, however, was the absolute cravenness of many who would hold power. It taught me about the impact a lie could have on people all too willing to believe it, about the indecency of an American government fueled by jingoism and guided by shamelessness, greed, untruth, and military power. During the months and years after 9/11, I learned not to believe what the President said and, more harrowingly, to recognize that lies could become true if enough people believed them—or, worse, that truth didn’t matter because people were going to die either way.

During the Bush administration, I was awakened into a kind of outrage and distrust. And most every poet I knew felt similarly.  It wasn’t that we followed every moment of those far-away wars, but that we recognized that somehow our own government was now the enemy of decency, of idealized democracy, that suddenly we were perhaps a malevolent force in the world, that we were, as citizens, complicit.

And when I got together with groups of poets like myself—mostly white, mostly highly educated, mostly academics, mostly publishing with mainstream presses—the conversation almost always turned toward the outrages the Bush administration had brought against truth and our vision of what America had once been.

This isn’t to say that we were always right about these things we said. Neither is it to say that we were the first to get there. Generations of marginalized people had arrived at distrust of government long before we did, and their distrust was certainly more profound, complex, personal, and deeply historical. But under the Bush administration, my mainstream poetry friends and I (again, mostly white, etc.) came to see the American experience in a new, more troubling way.

That this didn’t resolve itself into a vast body of poetry about the wars in Iraq and Afghanistan isn’t exactly surprising. We were taught to “write what you know,” and very few of us knew firsthand the horrors of war or the fears of the draft. The CNN news updates about suicide bombings, so-called insurgents, and snipers played out in the endless background of our more immediate and personal despair about an America that had failed us at home.

When I look at the poetry my much more diverse students read and write today—much of it located in centers of trauma, of victimization, of marginalized speakers trying to make sense of the world around them—I wonder if I see some powerfully articulated echo of the damage and awakening the Bush administration forced many of us older poets to look at, to live through—and not just the poets like me, who probably got there late, but all of us. Many years ago, my wife used to call much of the poetry she read in, say, The New Yorker, “the poetry of old men walking through leaves thinking wistfully about their fathers.” And there was some truth to that, then.

But the younger poets are a more politically engaged lot. They are quick to recognize the social forces they are up against and to speak truth to them. They are also quick to value the importance of the lone voice lost in the hurricane of lies or violence or oppression and to value that voice. To write about it and understand it.

I would be a fool to say that 9/11 created this re-envisioning of the voice of poetry, or that it directly inspired any movement toward diversity or political seriousness or social justice in poetry. At the same time, I think the horror of what I consider to be the most damaging administration of my lifetime (against some stiff recent competition)—an administration bent on war and nation-building that is largely responsible for decades of military conflict, untold deaths, and vast crises across Europe and the Middle East—certainly also changed the worldview of two generations of poets and made most of us rethink, more broadly and slowly, over decades, what our roles as poets and citizens might be.

I began this little essay saying that in 2001 I really didn’t have a sense of my poetic voice. And I never have written extensively about Iraq or Afghanistan or 9/11, even as I lived through them and, to varying degrees, they are memorable to me. But the complexities of democracy, the vastness of the political world, the smallness of the single voice, the importance of justice, and the fact of erasure became subject matter for me as, I think, they did increasingly for many poets of my generation and, even more, the generation that followed. And I do think in very broad and difficult to quantify ways, the fact of 9/11 had something to do with that.

This essay on the impact of 9/11 on American poetry is part of an ongoing project in which we hope to offer perspectives from writers of all backgrounds. If you have an interesting essay to share that relates to this topic, please send it to us at “Interviews/Reviews” via Adroit’s Submittable. 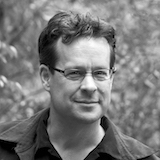 Kevin Prufer is the author of seven poetry collections, most recently The Art of Fiction (Four Way Books, 2021) and How He Loved Them (Four Way Books, 2018), which received the Julie Suk Award and was long-listed for the 2019 Pulitzer Prize. More at www.kevinprufer.com.